Experience -> Study Abroad -> Teaching
After School
While in Ghana, I helped create an organized after school program to help students learn to read, write, and do basic arithmetic. We grouped the students so that they could help each other learn basic reading and math skills.

Students would come after school to the basement of the house I stayed at. They'd find their tables (red, orange, yellow, or green), and begin lessons. The lessons were co-taught by one or two volunteers supporting one of the scholars of the house. The scholars are the ones responsible for most of the activities and helping students translate Twi to English. The volunteers are just there for support and to help guide students to stay on task. 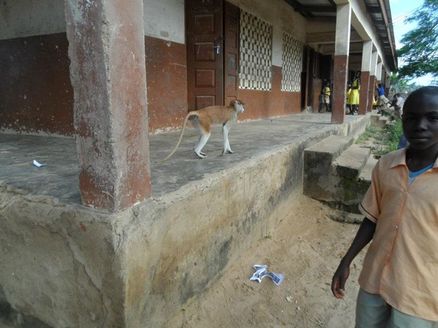 Sometimes, this monkey joined us for school. That was distracting!
In School
While in Busua, I taught in KG-1 (Kindergarten 1 class) in the local school, while the teacher was on break.  The school was about a 3 minute walk from the house I was staying at. I usually taught Monday-Thursday, and some of the Fridays, but I tried to spend Fridays planning for after school activities and to get to know the scholars. Above is what the school looked like from the outside. Below is a group of my students in a classroom. Usually, the adults in Ghana didn't like it when I took pictures. The kids loved them, so they convinced the adults it was okay for the volunteers to take a few pictures. We spent the mornings learning reading skills, mainly letters and common groups of letters; then we spent the afternoons learning math or, sometimes, science.  Since I didn't know enough about Ghanaian geography, politics, etc., I did not attempt to teach any sort of social studies.

Difficulties
In the school I taught at, students were expected to buy their own uniform and materials. However, we were in the middle of a rural village where there really was not much, if any, money in 98% of the families. Therefore, students often wore ill-fitting uniforms, if they wore them at all. I never once saw a student with the workbook they were supposed to have. (The one in the picture above is from the library in the house I was staying at). Often, we had just one small piece of chalk, with no eraser. Most of the rooms had one or two posters, but they were old, faded, ripped, or out of date. Students sat three or four to a bench in many classrooms, and a high number of them weren't in school more than two or three days of the week. Everyone had more important things to do, like help their families in the fields. Even with all of this, the students loved coming to school. In part, it was because they got to see a white face, which was new to a lot of them. But, overall, these students recognized the value in education, even if they didn't always know how to access it.