Math as a Language: Explicit Instruction 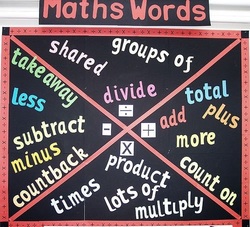 There is no doubt in my mind that making math language explicit is a helpful way to learn mathematics, and I make this assumption clear when I start a new class or tutoring position.  I do think that my students, after a few weeks of lag to adjust to the new way of thinking about learning, retain and understand mathematical concepts better.  They start to get comfortable explaining what they understand to others (especially those who miss class).  In my mid-semester and end-of-semester feedback forms, I tend to get two types of responses: “We’re going way too fast and I don’t understand,” or, “Math is easy when we think about it like you’re showing us. Why doesn't everyone do it that way?”  While the first type concern me, only two of my students who have written these types of responses have not done well in the class overall.  Part of what makes mathematics complicated to understand as a separate language is how ingrained it is within the language of instruction (in the USA, mainly English). 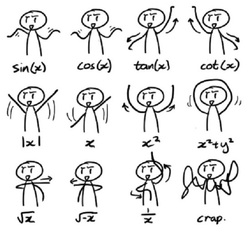 As I teach graphing, I use the rhythmic creations from my own explorations to help students understand how an equation ‘looks’.  That is, we dance.  The first time I ask my students to get up and dance, they look at me funny and don’t really want to do it, and some years, students haven’t liked it at all, but others, my classes ended up enjoying it, and I can see them wriggling in their seats, mouths moving, when they are taking their tests, so apparently, it makes an impression. 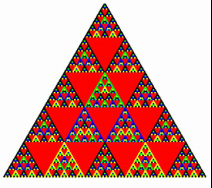 Pascal's Triangle
Patterns, and finding patterns, is one of the most important skills in a mathematics classroom.  John K. Lannin outlines six ways students generalize from specific contexts, which I've found helpful in categorizing what kinds of mistakes my students make on certain problems.


The least mathematically rigorous solution to a problem is the guess-and-check solution.  Often, my students will do this with factoring problems.  When they have something like 4x^2 – 7x + 3, they know it has to be of the form (ax – b)(cx – d).  They will randomly plug in numbers for a, b, c, and d until they get a solution that works.  Another quite imprecise approach to problems is what Lannin calls counting, and I’ll call individualized representation (with counting being one form of this).  If we go over an example problem like the one above, when they come across another problem with a leading coefficient of 4, they will often automatically split it into 1 and 4, instead of understanding that the outcome of the generalized rule depends on the specific context.  (For example, if the expression were 4x^2 – 8x + 3, this wouldn’t work).  Lannin’s whole-object strategy is slightly more formal, in that it attempts to apply mathematical reasoning to situations, but is lacking in rigor because of the limited understandings of what is formally going on.  This would be exemplified by the (not often) mistake of students finding factors of 8 by multiplying the factors of 4 by 2 (this discounts 1 as a factor). Then, the rate-adjust model offers the first mathematically rigorous generalization attempt.  However, is a linear based model for algebraic generalizations, which works well for contexts involving slope, but not much else.  Lastly, as a sort of spring-board from the rate-adjust model, Lannin explains the use of the contextual model.  This is the most mathematically rigorous model Lannin outlines, and the rules constructed from this way of thinking produce a general rule which results in the correct answer in any context similar to the one in which the rule was developed.  We call this, in the factoring context, the AC method.


In my classes, we first figure out the formulae for different types of polynomials by going backward. That is, we’d have two polynomials, and we’d distribute them to come up with a bi/tri/quadrinomial.  Then, we’d follow our steps backward to figure out how to factor polynomials that looked like that one.  By taking the knowledge we already had, we were able to find a pattern, and an algebraic rule for that pattern, to explain how to factor binomials, trinomials, and quadrinomials (also called quartics).  Therefore, my students could predict what a factor of each might look like in the intermediate steps and at the end, helping them solve problems that involved factoring quartics.